History of the Ponce Inlet Lighthouse

For over 100 years, the Ponce de Leon Inlet Lighthouse has served as a sailor's savior; a light in the distance, warning of the unseen land or guiding the weary travelers home. Built in 1887, in the area then known as Mosquito Inlet, the lighthouse saw many trials and tribulations in its transition to its present standing as a National Historic Landmark. 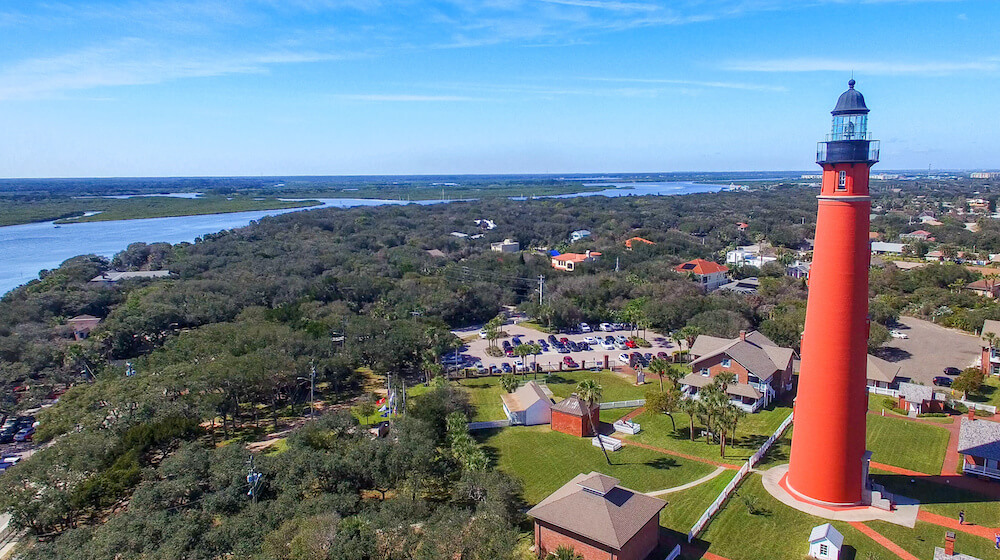 History of the Ponce Inlet Lighthouse

A history of death, war, and vandalism could not hold down the spirit surrounding this Central Florida touchstone.

The lighthouse's story begins with a tragic event when Chief Engineer Orville E. Babcock, along with three other people, drowned in the inlet in 1884. Despite the tragedy, the build continued and was eventually completed three years later. Its beaming kerosene lantern that stretched 20 miles into the sea was first lit on November 1, 1887, and William Rowlinksi was the first Keeper.

Rowlinski served until 1893, when his successor, Thomas Patrick O' Hagan, took over lighthouse duties. During O' Hagan's tenure, a gun-running steam tug carrying munitions and supplies to Cuba during its rebellion against Spanish rule wrecked 13 miles offshore in 1897. Author Stephen Crane was onboard. Survivors of the wreck saw the shining light fixed at Mosquito Inlet. Crane reported the event in the New York Post and later wrote a famous short story based on the experience.

Today more than 125,000 visitors visit the lighthouse annually and ascend its 203 steps to the top. There, the majestic beauty of Ponce Inlet and the surrounding Daytona Beach areas spreads in a perfect panorama.

Local citizens worked hard to get the abandoned property deeded to the Town of Ponce Inlet. In 1972, the nonprofit Ponce de Leon Inlet Lighthouse Preservation Association was formed, the lighthouse restored, and eventually listed on the National Register of Historic Places.

Today, Ponce Inlet Lighthouse and the keepers' dwellings are a museum showcasing artifacts, rotating exhibits, and history. Visitors are welcome to climb the tower, tour the buildings, and transport themselves back in time to the late 19th century as they learn about the work and family life at the lighthouse.

Events at the Ponce Inlet Lighthouse

Events at the Ponce Inlet Lighthouse include self-guided tours, guided tours, and special event tours, such as “Climb to the Moon” and “Climb with the Keepers.” Visitors are invited to participate in interactive workshops, living history presentations, and hands-on activities. Special programs are offered to students. Couples can even choose to get married here!

Ponce Inlet offers visitors a fascinating slice of Florida history. Enjoy the scenery and learn more about the value of lighthouses and the transformations that took place at this historical landmark over time.

Great views of the Atlantic Ocean and the inter-coastal waterway from 175 feet in the air mark a wonderful spot to possibly even scope out your perfect dream home. And thus, as with the sailors a hundred years ago, the lighthouse continues to serve as a beacon of beauty, bringing people home.