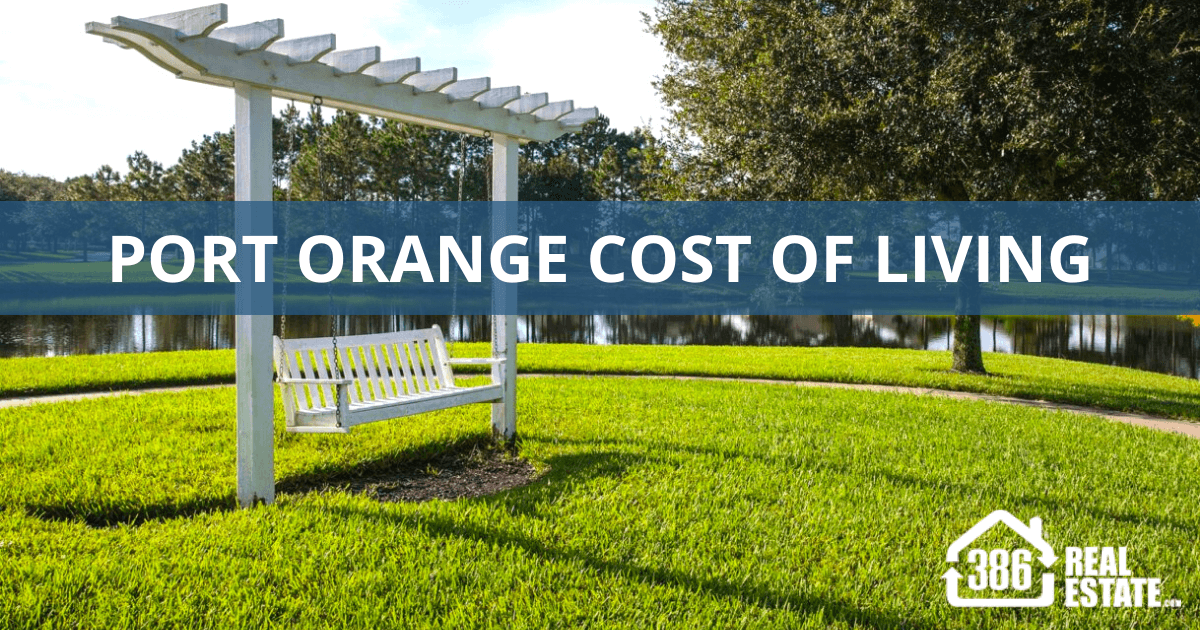 Port Orange is a city of about 65,000 people in Volusia County on Florida's Atlantic Coast. It is part of the Deltona–Daytona Beach–Ormond Beach metropolitan area, which has about 600,000 residents.

The overall cost of living in the city of Port Orange is about 3 percent lower than the national average and about 5 percent lower than the average cost of living in Florida. Port Orange ranks as the 2,223rd most affordable city out of 6,399 cities surveyed nationally. Health, housing, utilities, and transportation all cost less in Port Orange than in the rest of the country. Groceries cost slightly more than the national average. However, they still cost less than they do in Florida as a whole.

Continue reading to learn everything you need to know about the cost of living in Port Orange.

Housing costs take up a major portion of most people's budgets. In fact, most Americans spend 37 percent of their take-home pay on rent payments or mortgage costs. In Port Orange, the overall cost of housing is slightly less than the U.S. average and about 4 percent less than the Florida average. Of course, the difference could be more in some cities. For example, someone who lives in Hollywood, Florida, would pay almost 20 percent more for housing than a resident of Port Orange. 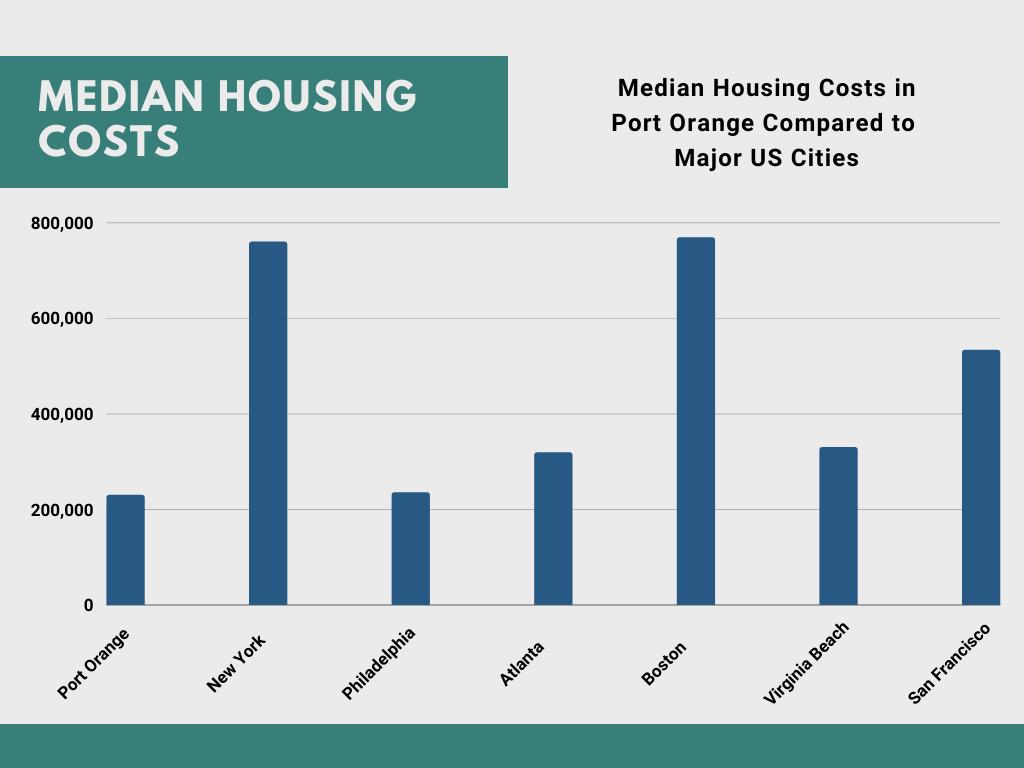 Rent prices also vary by the size of the rental unit. The average rent for a two-bedroom house or apartment is about $1,600, about $2,200 for a three-bedroom, and about $2,800 for a four-bedroom unit. 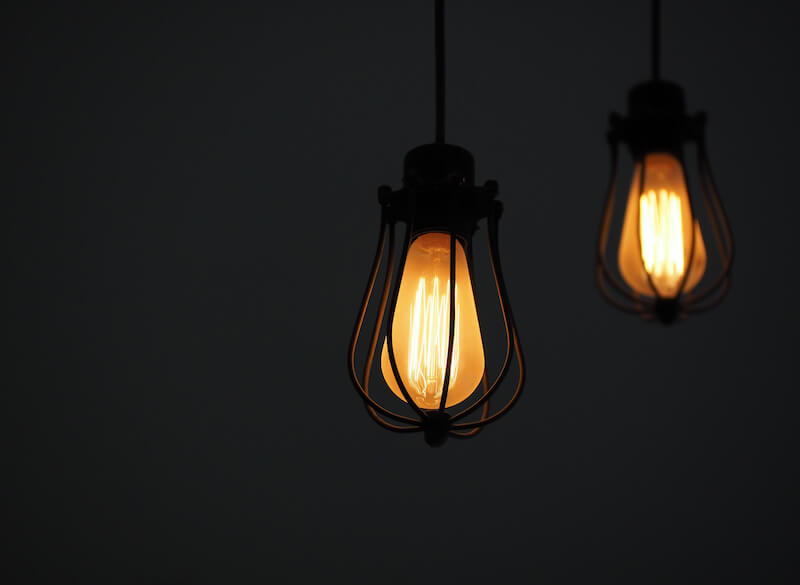 Utilities are part of the overall housing cost. Overall, utilities in Port Orange are less expensive than in most of the country, even though the city's hot temperatures likely mean air conditioners will run continuously in the summer.

The average phone bill in Port Orange is about $187 per month, which is a little higher than the national average. Internet prices vary between $35 to $50 per month, depending on the type of connection and the company.

The cost of homeowners insurance depends upon several factors, including the house's location, its cost, the materials used to build it, the year it was built, deductibles, the insurer, and the claims history. For example, homes built after 2001 cost less to insure than older homes because the newer homes are built using more stringent building codes. As another example, customers may shop around and find a variance of as much as $600 a month between insurers. By carefully comparing the coverage and reputation of the company, homeowners can determine the best value.

Food costs for groceries and restaurants are a little more expensive in Port Orange than the national average. However, they are still lower than the Florida average. On a scale of 1 to 10, with 1 being the most expensive and 10 being the least expensive, Port Orange receives a score of 3 for its food costs.

Here are the average prices for common items in Port Orange compared with the national average: 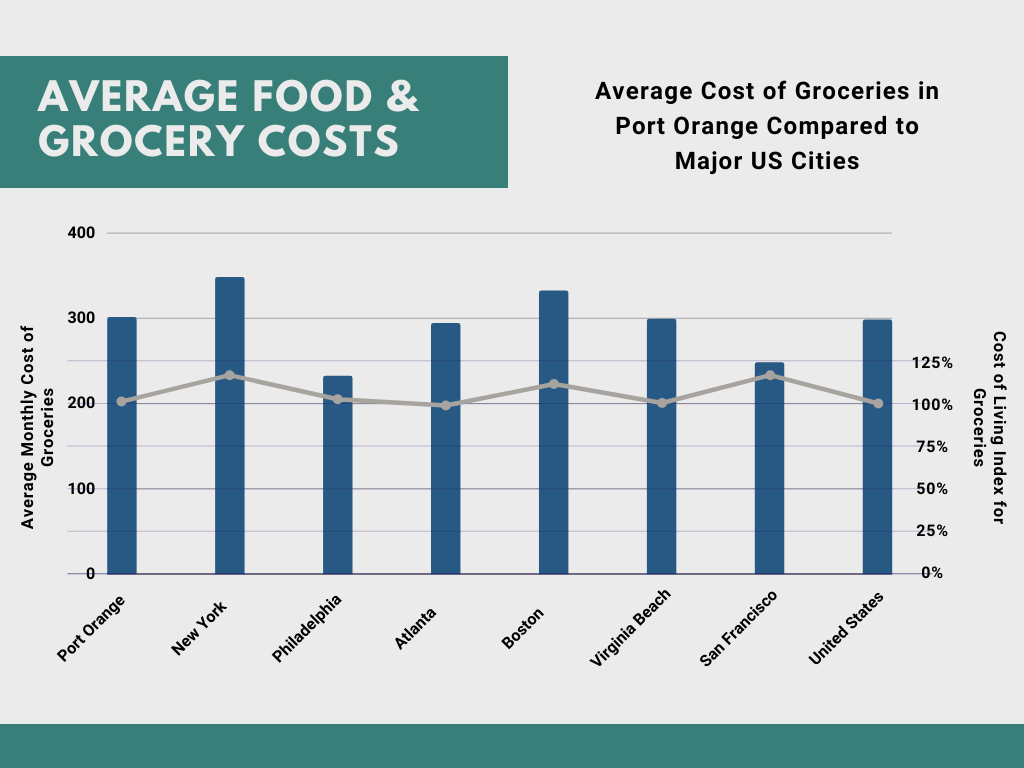 Residents can save on groceries by shopping around because some stores offer items at lower prices. The Walmart Supercenter in Port Orange and Sam's Club in the city of Daytona Beach will generally have lower prices. 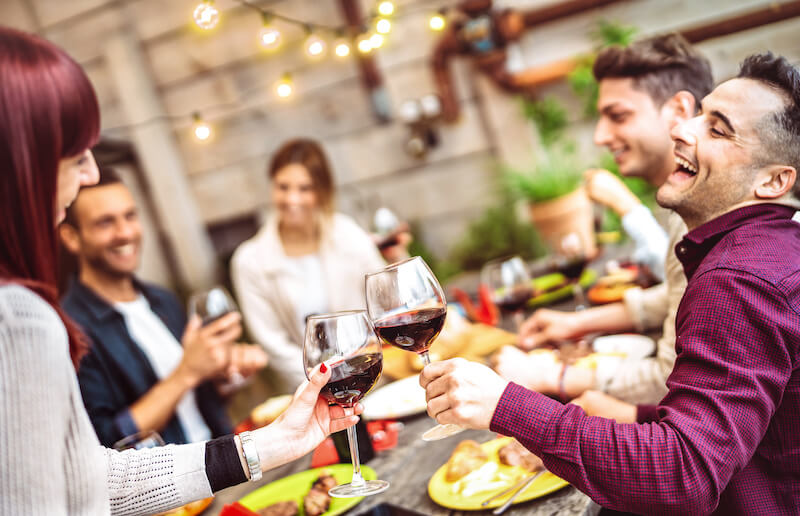 Eating out is a discretionary expense, and residents can control their spending by eating out less often or eating at less expensive restaurants. A breakfast of two eggs, home fries, toast, and coffee at a diner or café might cost between $3.60 and $4.35. An 8-ounce burger with fries and slaw at a diner would cost about $6. One three-course dinner (appetizer, entrée, and dessert) at a moderate-priced restaurant might cost about $30 to $40. At a fine dining restaurant in nearby Daytona Beach, a three-course dinner for one might cost $100. 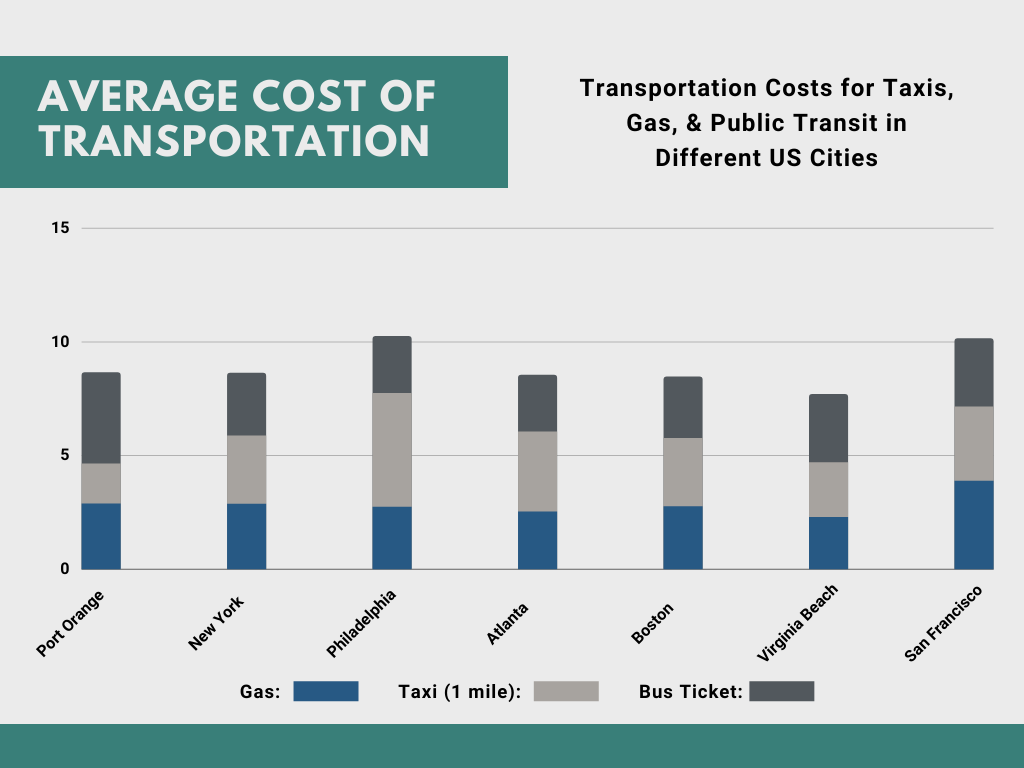 Auto insurance rates vary depending upon the make and model of the car, the driver's record, credit score, and the coverage and the amount of deductible chosen. The average annual car insurance cost in Florida is about $1,250, which is about 25 percent more than the national average. The cost breaks down to about $860 for liability insurance, $280 for collision coverage, and $110 for comprehensive coverage. 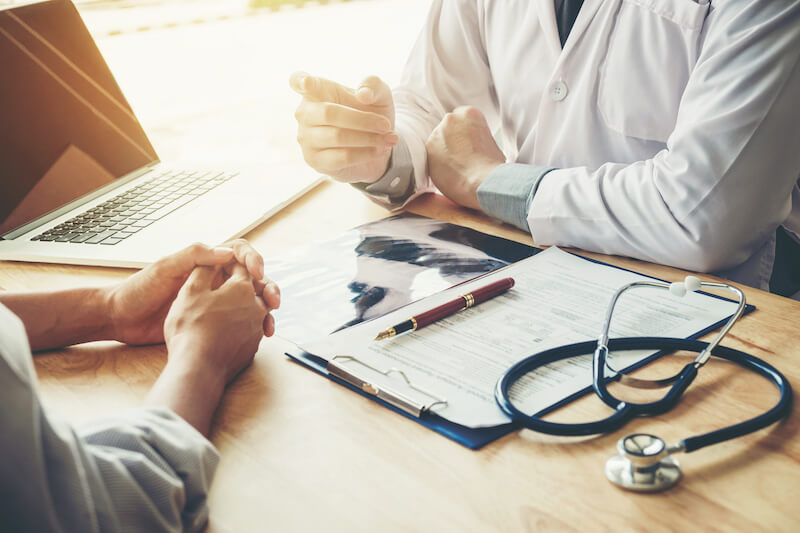 Health insurance costs vary depending upon how much choice the plan offers, the individual's age and health, and the size of the deductible. Overall, the average monthly cost of an individual health insurance plan in Florida with a $4,945 deductible is $115, considerably lower than the national average of about $400. Individuals can save money by choosing a higher deductible or higher co-pay or choosing an HMO, which requires them to use certain doctors rather than a plan that allows for more choice.

Child care can be a significant part of a budget. The price of child care varies depending upon the child's age and whether nannies or daycare centers are used. Generally speaking, child care costs are higher for younger children and lower for older children. Some daycare centers also do not accept infants, so parents of infants will have fewer daycare choices for comparison shopping. Nannies also are typically more expensive than daycare centers, although two or three families could go together to share a nanny to save money. 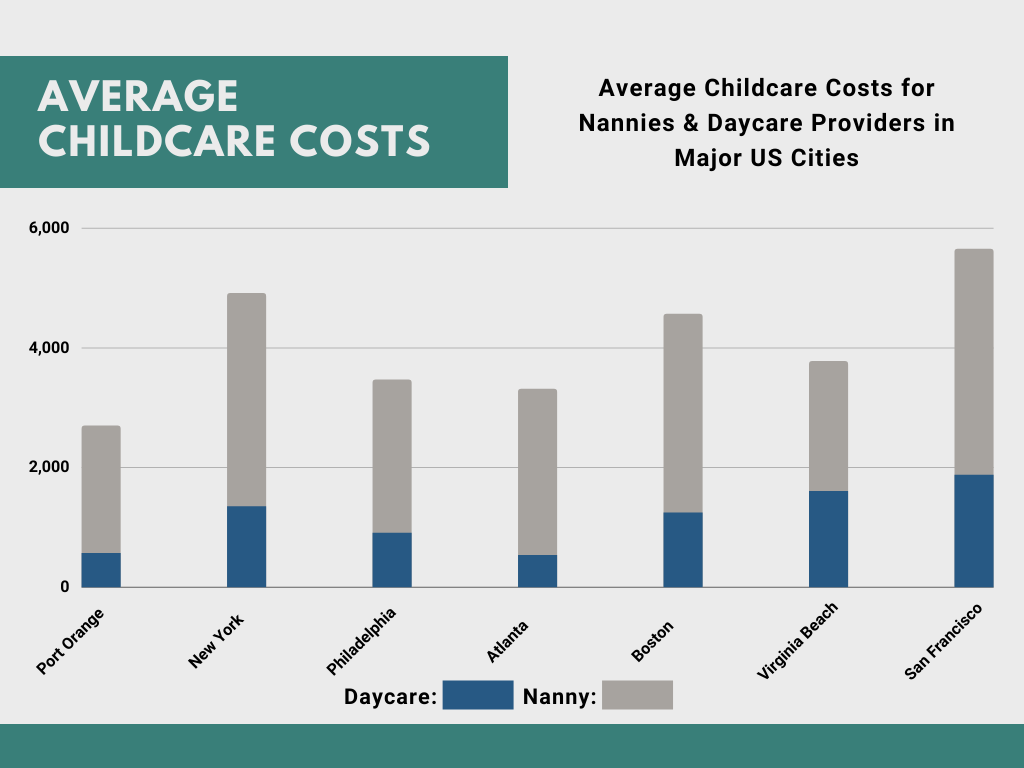 The average cost for daycare in a center is about $600 a month in Port Orange. The cost for nannies varies from $10 an hour to more than $22 an hour, depending upon the nanny's experience and the position's responsibilities. For example, if the nanny will be required to drive the child to and from school or to appointments, the cost will be greater. 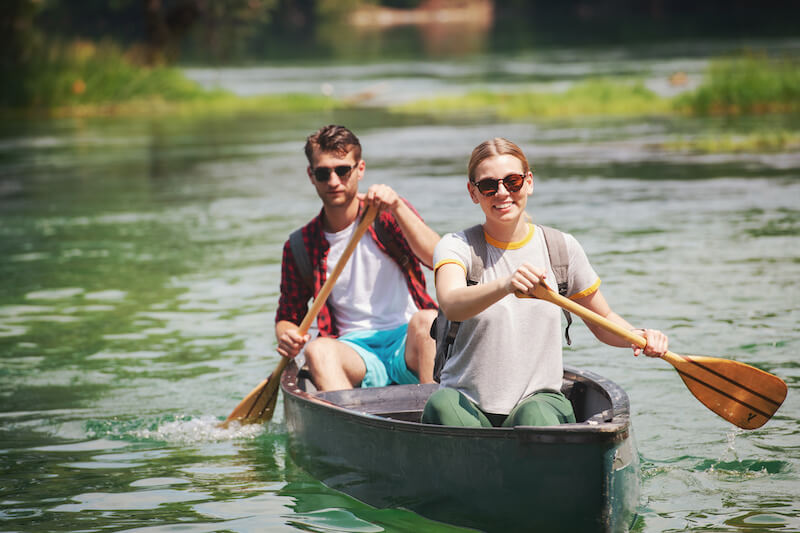 Several of the most fun things to do in Port Orange are free. One example is a visit to the Dunlawton Sugar Mill Gardens, a 10-acre property of historical and natural significance. City parks also are free. Spruce Creek Park, for example, is situated on 23 acres and has miles of trails and an observation tower. It also has a playground and canoe launch site. Browsing flea markets is free unless, of course, an individual finds a treasure to buy. All Aboard Flea and Farmer's Market is one example.

Port Orange also has attractions and activities that have a moderate cost. Movie tickets are about $12, and bowling is about $14, for example. Historic Gamble Place features a historic home, cottage, and citrus packing house that James Gamble of the Procter and Gamble Co. built and used in the late 19th and early 20th centuries. The cost for a self-guided tour at Gamble Place is $3 for most adults, $2 for senior citizens, and free for children. Guided tours are $6 for most adults, $5 for senior citizens, and $3 for children. Theater tickets at Thank You Five, a performing arts facility, are $17 each.

Residents can find professional sporting events in nearby cities, and they cost a bit more. For example, adult tickets to events at the Daytona International Speedway start at $35 for smaller events and go up to about $500 for the Daytona 500 race.

The minimum wage is $8.65/hour, which is higher than the federal minimum wage of $7.25/hour. Port Orange's economy employs about 28,000 people. The highest-paying jobs in Port Orange are in the utilities industry (average about $57,000/year), finance and insurance (about $55,000/year), and information ($54,000/year). The most popular jobs are in health care and social assistance, retail trade, and food services.

The average pay rates for some key jobs in Port Orange are:

Final Considerations About Cost of Living In Port Orange

It's important to understand the cost of living before making an informed decision about moving to Port Orange. Many factors go into that cost of living equation. The overall cost of living is lower than the national average, and major costs such as housing and health care are less expensive. While the average Port Orange salary is about 7 percent below average, the lack of a state income tax means residents keep 5 percent more of their money. When all the factors are considered, the spending power of someone living in Port Orange is roughly equal to the national average.

The cost of living also is just one factor in determining whether a city is a good relocation choice. Other factors include the lifestyle offered, transit times, and the overall economy of the region. Port Orange offers opportunities to live near the beach and in a temperate climate. In exchange for the cost of living, residents enjoy a laid-back coastal lifestyle.